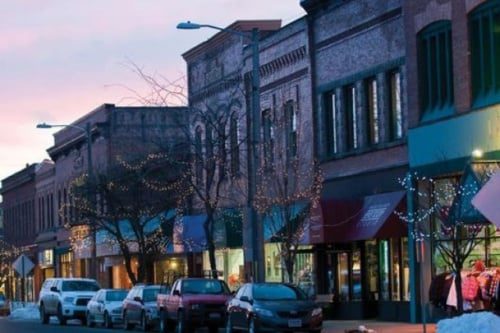 Greg Green, president of the fiber installation company Fatbeam, said it is the perfect example of a private/public partnership after helping get the two companies lit up.

“We turned both of these aerospace companies up at the request of the city,” Green said, adding that City Administrator Jennifer Stapleton deserves much of the credit. “It’s the first time we’ve ever tried to do a public/private partnership, and it’s worked.”

Stapleton said Tamarack was in the position of wanting to keep their headquarters in Sandpoint, but desperately needed a better network to do their business.

“We had moved into this facility three years ago and had the promise of high-speed internet access as part of the build and the move, and we just have never been satisfied,” said Brian Cox, chief operating engineer with Tamarack. “We’ve never really had high speed internet access here. So yeah, it was kind of exciting to get that rolling and now have it.”

Tamarack is located at the Sandpoint Airport as is Timberline. The city buildings, from the water treatment plant to City Hall were lit up with fiber earlier this year. Public Wi-Fi is also offered on the city fiber at Jeff Jones Town Square.

The city had two goals with its fiber-backbone buildout, Stapleton said. The first goal was to get better service delivery for the city, as an entity itself, with higher speeds, lower rates, and more reliable service. The second goal, she said, was building a backbone which could serve as the structure for service providers to build off of, improving and bringing new services to residential and commercial in the community.

The city has been working with the county as well, and the next phase is the buildout from the county administration building to the sheriff’s office and jail. Stapleton said originally, the plan of that second phase was a spur off that route to the airport, which would run along Industrial Drive for service to the city shop, as well as bringing service out to the FBO at the airport for the county. But due to cost considerations, she said, the Industrial Drive spur was dropped from the plan.

So the city entered into an indefeasible right of use agreement with Fatbeam, which is also the company contracted to build a $2.8 million, 49-mile infrastructure for the Lake Pend Oreille School District’s Fiber Wide Area Network throughout the district’s 13 locations. The school district’s core buildings in the Ponderay and Sandpoint areas were lit this summer, and the more rural schools will be completed in the spring and summer of 2018. Fatbeam was able to work with the city to obtain some of the infrastructure it had be installing underground over the course of several years, and then the city was able to get some help from Fatbeam for the Industrial Drive area.

Stapleton said the city had about $20,000 left in funding allocated through SURA, and city crews dug the spur down Industrial Drive to the city shop. Fatbeam then came in and pulled the wire and a product called MaxCell through the conduit to hook up the shop, extending the service to Tamarack and Timberline.

“It was a good example of where we were really able to work in a public/private partnership model to get the services we needed to provide better service delivery to our citizens via the city, but also to get that commercial service out to the businesses at a lower cost, and in an expedited fashion,” Stapleton said. “Also, this is a perfect example of how critical the fiber infrastructure is, and the improved bandwidth is for the business in our area in retaining our jobs and retaining our businesses in the community.”

“A private company working with the city and economic development can make things happen, and this is just a great success story,” added Green.

While Fatbeam is a company that builds the fiber infrastructure and then leases it to other service providers, it is the service provider for the city. Green said the company is “a bit like a wholesale provider.”

Stapleton said there are three players coming in on the city fiber. Fatbeam, whose service is predominantly focused on the schools and service to commercial clients. Intermax Networks is a North Idaho company that provides commercial and some residential service, and Ting, which will be coming in this fall, and primarily focuses on residential and small business.

“So we kind of have a mixture of all three going on,” Stapleton said.

Intermax has provided fiber services to commercial businesses in Sandpoint for several years already, said the company’s president, Mike Kennedy in an interview with the Daily Bee. In May, it became the first company to enter into all of the required agreements with Sandpoint to provide service on the city’s fiber network. The city’s expansion, Kennedy said, has allowed Intermax to get into some places it otherwise would not have been able to.

Kennedy said three commercial clients in Sandpoint will be live on fiber in the next three to four weeks through Intermax. On the residential side, the company is announcing its fiber-fed LTE, which is a residential-based, higher-speed bandwidth for homes and small businesses.

“We will be rolling that out, which will provide much faster bandwidth, particularly for the citizens right in Sandpoint proper, to give them better streaming, better uptime, and faster speeds,” Kennedy said. “… We can’t wait until Sandpoint customers have yet another option for higher speed, better streaming, in town and we’re excited about it.”

LTE, or Long-Term Evolution technology is a standard for high-speed wireless communications, and Intermax’s investment is the largest by a North Idaho-based fixed internet service provider, Kennedy said in a statement.

A few advantages of the LTE service include, of course, faster speeds and lower latency, but also lower costs per megabit of bandwidth versus cable or microwave technology. Sandpoint is the first deployment of the LTE for Intermax, and will be followed by Coeur d’Alene and surrounding areas.

“We are committed to cutting-edge technology that will better compete with the old-school cable and DSL services that North Idaho residents have struggled with,” Kennedy said in the statement. “It allows us to continue to expand our footprint in North Idaho and provide dependable broadband services to residential and commercial clients no matter their size or location.”

Ting had Sandpoint on its radar for some time before the city went live on fiber, and is currently working on getting a central office set up near City Hall. The space has been secured, and the company’s director of networks, Adam Eisner, said they plan to get the office built in September. Shortly thereafter, he said, Ting will start construction on the network.

“We have been working with the city to develop and submit construction plans, so we are in that process right now,” Eisner said. “As that gets firmed up, we are hoping to begin construction. So we don’t have a precise date yet when we will start. I would be disappointed if we didn’t have shovels in the ground this year.”

Ting plans to start with coverage in Sandpoint proper, with hopes of expanding to surrounding areas in the future, such as Dover, Kootenai, and Ponderay.

Eisner said Ting just had its first Sandpoint employee start, and the company is in the process of securing facilities in the area. Along with the central office, Ting will need a warehouse for storing equipment.

“In the next few weeks, in the next couple of months, you will really see us start to ramp up both our presence and our work there, which we are pretty excited about,” Eisner said. “We are almost there. We know people have been waiting awhile, but the rubber is starting to hit the road now.”