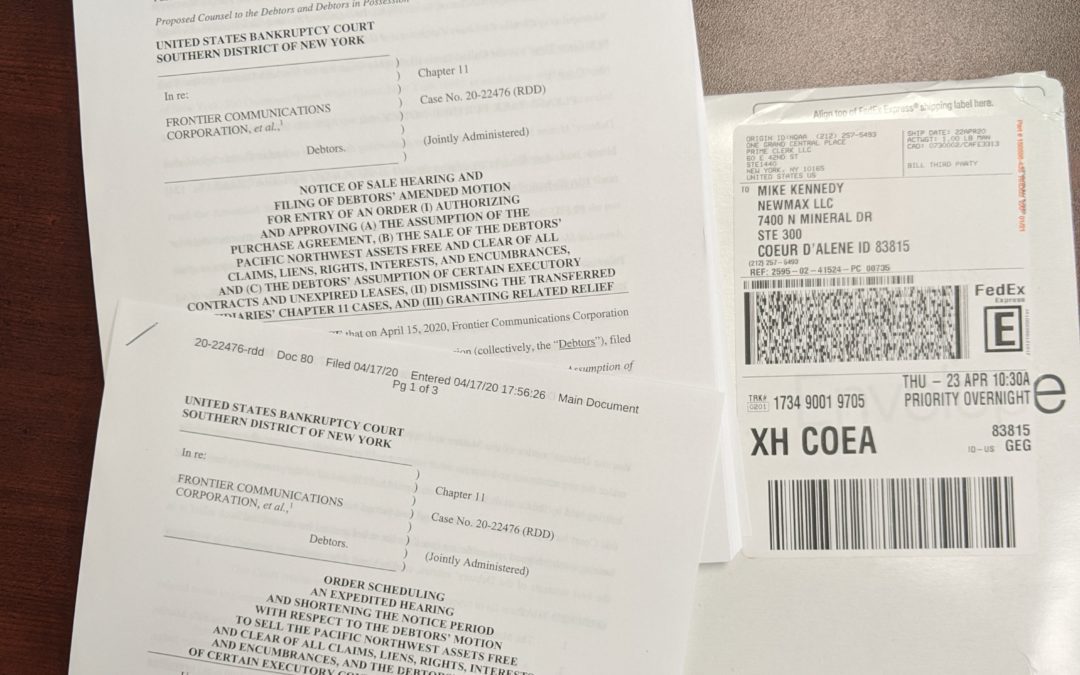 By Christi Fleischman April 24, 2020 In the News, Internet, Local News

April 23, 2020 | COEUR D’ALENE — Intermax Networks announced today they will be filing a letter with the FCC opposing Frontier Communications’ sweeping attempt to block parts of the FCC’s $20 billion fund to expand rural broadband.

“The FCC is doing the right thing in opening up a fund to help bring more high-speed internet to rural America, and rural Idaho,” said Mike Kennedy, President of Intermax. “But Frontier has filed questionable motions to protect their monopoly, attempting to block wide swaths of Idaho’s rural counties from gaining legitimate broadband access,” Kennedy continued.

FCC Auction 904 (referred to as RDOF for Rural Digital Opportunity Fund) is a federal program to reduce the digital divide between urban America and rural America. As part of the program, the FCC allows for an expedited challenge process where internet providers that are legitimately serving those rural areas can ask to have them removed because high-speed internet already exists.

The auction is budgeted for $20.4 billion, which would be the largest rural expansion auction ever proposed. It would require bidders to offer at least 25 Mbps download speeds, with an emphasis on higher tiers and even fiber to the home for faster speeds.

“Anyone who lives in Idaho’s rural counties served with Frontier’s decades-old technology knows the pain of creeping speed internet. Unfortunately, Frontier has tapped their East Coast corporate legal teams to file sweeping, unproven, and untested statements in a hasty claim that Frontier already delivers high speed internet over their phone lines. These claims are an effort to block Frontier served areas from being eligible for high speed service grants from the RDOF auction. This is a blatant attempt to preserve Frontier’s monopoly of 50-year old technology to our rural neighbors and prevent them from receiving actual high-speed broadband from competing providers with modern technology,” Kennedy stated.

“During the FCC process AT&T, one of the best financed companies in America, claimed that it upgraded ~1,600 census blocks while Frontier, a company in bankruptcy with a questionable performance track record at best, claimed over 16,000 census tract upgrades (100 times what AT&T was able to do) to prevent about 400,000 rural Americans from gaining high-speed broadband. Rural Idahoans can already see through this questionable claim; hopefully the FCC sees through it as well,” Kennedy said. “Ironic that not only does Frontier want to have their cake and eat it too, they want rural Idaho residents to pick up the tab for their meal.”

“The worst part of this whole scandal is that if the FCC allows Frontier to succeed in this questionable effort, Idaho will be the biggest loser. Instead of the money being spent delivering true broadband to rural Idahoans, the money will simply be swept up by other states where Frontier is not the incumbent, starving Idaho of the broadband services WE deserve.”

“I believe in what the FCC is trying to accomplish by helping rural America,” Kennedy continued. “Chairman Ajit Pai and the commission should reject this cynical game-playing by a desperate bankrupt national company.” 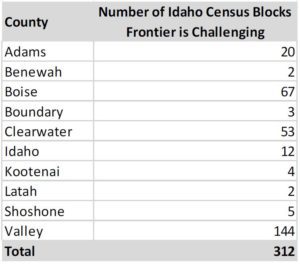